As they say, sequels are always WAY better than the originals.  Right? “Listen, Kawhi – we’ve done some great things already, but we need you to come up huge today.”

In all seriousness, a true testament to the strength of the organization and Coach Pop and Tim Duncan’s relationship that the Spurs made the right basketball decision to bring Duncan off the bench and nobody even blinked about it.  This is just what they do.

Can I get in trouble for noting that the skin tones here are perfectly placed on the “Steph Curry to Draymond Green” scale of skin tones? Asking for a friend. 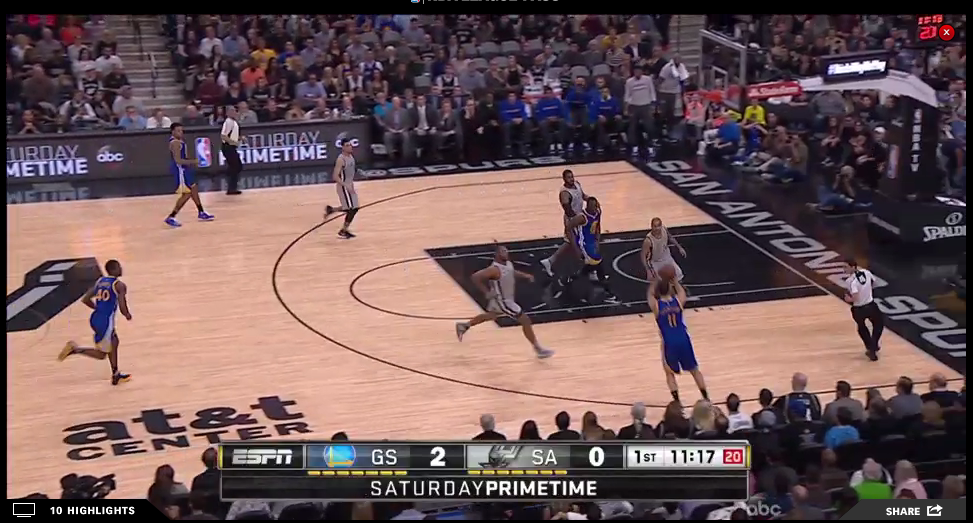 Not a Harrison Barnes fan. He missed.  Good luck paying him the max, team “Not The Warriors”. “This is the happiest day of my life”

LaMarcus Aldridge with a tough finish over Draymond Green.  Draymond’s matched up with a lot of bigger guys in the league, but LaMarcus is making him pay more consistently than any other player has this season – really impressive effort from him.

DON’T YOU DARE SLANDER ME! HOW DARE YOU SAY I’M A PART OF THE PHIL JACKSON COACHING TREE!

This ball was stolen by Father Time

Fun 1st quarter, although the Warriors missed open 3’s that could’ve changed the feel of this game.  Spurs definitely should be feeling like they should have a sizable lead at this moment, yet find themselves down 1.

The defense that Danny Green played on Steph Curry may have been the best I’ve seen all season. Blocked his three pointer, then bodied him up for the rest of the shot clock, forcing Steph into a turnover. Danny Green hasn’t exactly had a career year, but his length and versatility being able to guard Klay or Steph will be huge in a potential playoff matchup.

A little late to be promoting the movie Race isn’t it?

“Damnit” -Rest of the NBA

What makes the Warriors the Warriors? They don’t let bad offense hurt their energy – they just forced Kawhi to take a desperation 3 at the buzzer – lot of fun to watch.

Thank god ESPN came up with the brilliant “light up the 3 point line” thing – how else would I know Klay is shooting a 3 pointer here?

I JUST HAD AN AMAZING AND-1 I’M SO PUMPED UP RIGHT NOW I MIGHT EVEN KIND OF BUT NOT REALLY STICK MY TONGUE OUT!

How you can tell that Steph is off tonight – there’s no reason for him to pass this (he ended up turning it over) when he has a lane to the basket and can attack Aldridge.

A low scoring affair, for sure, but very entertaining first half.  The Spurs at this point should not be happy that they are only up by 6 given how cold Steph and most of the Warriors squad have been thus far, but should be encouraged by the defensive pressure they’ve put on Curry thus far.

Just taking a second to marvel at what a challenge it must be to guard the Warriors.  Look at this spacing – they have Steph, Klay, Brandon Rush, Harrison Barnes, and Draymond Green out here- all more than capable 3 point shooters (including 2 of the best to ever do it).  Dray ended up making a wide open 3 in this possession. 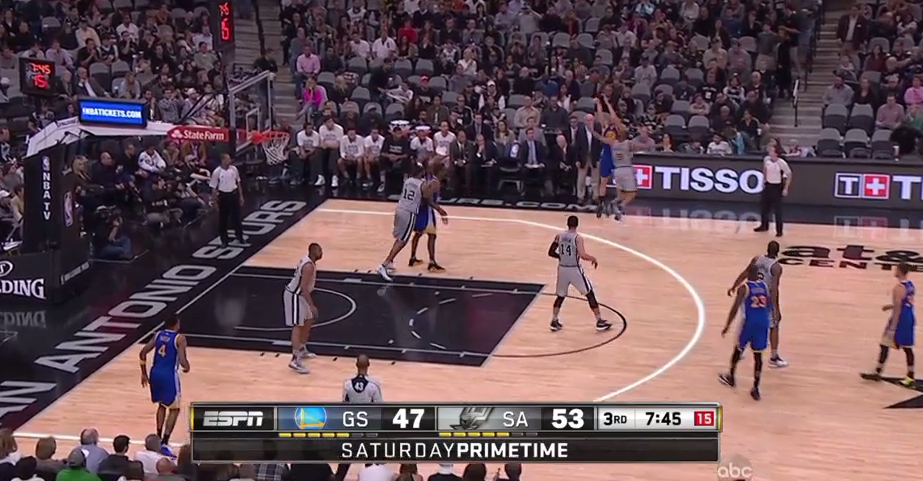 Beautiful out of bounds play to get Klay open (he makes it), and just like that it’s a 3 point game.  Again, thank you ESPN – how else would I know this was a 3 point shot?

The pace has definitely picked up, to the Warriors benefit. 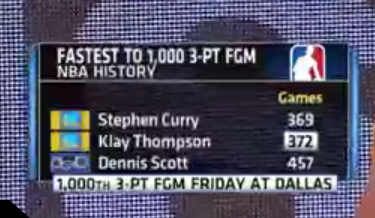 Amazing. (sorry for the graininess – having some frustrating bandwidth issues, this may be an issue moving forward) 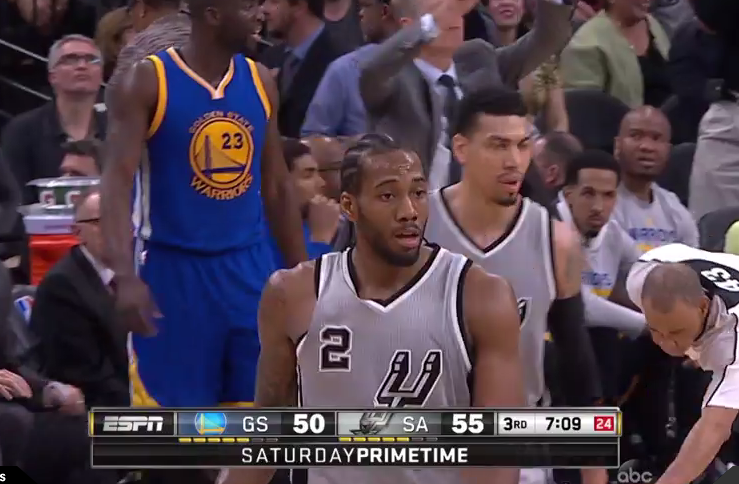 Bad call against Kawhi, you can tell based on how angry he looks here.  He seriously needs a Luther the Anger Translator – Key and Peele is done, do you think Keegan-Michael Key can clear up his schedule for the Spurs playoff run?

Steph with a ridiculous 3 being guarded closely by LaMarcus – for his first 3 of the game. Tie game! This point of the game is where the Warriors have traditionally killed teams all year.  Once again, thank you ESPN for letting me know that this was a 3 point shot.

LaMarcus with a grown-ass power move against Draymond Green.  Loved his energy all night, he’s getting more and more comfortable with this team.

Crazy that either of these 2 won’t be making the NBA Finals this year.  Another reason  why counting rings to determine a player’s worth is generally a terrible idea.

How I know this is a good game?  It’s tied after 3 and I’m not sure who should be happy about it.

The coaching staff just informed these two that if they lose this game, they will be forced to attend Byron Scott’s basketball camp over the summer

“Seriously, Just For Men hasn’t called me yet?”

A score so NICE, they had to show it twice

I have a feeling that Mr. No-Fun Duncan isn’t enjoying the fact that the score is still *Borat Voice* VERY NICE

Really fun back and forth going on.  Danny Green hit a tough 3, followed by a Brandon Rush 3 on the other end – 1 point game.  And for all the crap I’ve given the 3 point lighting up thing, Rush was in the corner and people courtside were standing – the line lighting up was actually quite beneficial.

“ALTHOUGH THIS CALL WENT AGAINST MY TEAM, I UNDERSTAND BEING AN NBA REFEREE IS A DIFFICULT JOB AND THE CALLS WILL MOSTLY EVEN OUT TO BEING FAIR AT THE END OF THE DAY! THANK YOU!”

A tough shooting night is nothing to apologize for – but what I hated about this possession is that after Steph handed off the ball, he didn’t even try to get the ball for the entirety of the possession – even when he was near it.  I understand being a decoy, but the Spurs were playing him 1 on 1 here and he just had no interest in touching it.  Seems like the Spurs defense just deflated him by this point.

Even for Steph, bad shot. Plenty of time, and Steph has no rhythm going right now.  That’s pretty much game.

Also, thank you ESPN for letting me know this was a 3 (the snark is back!). 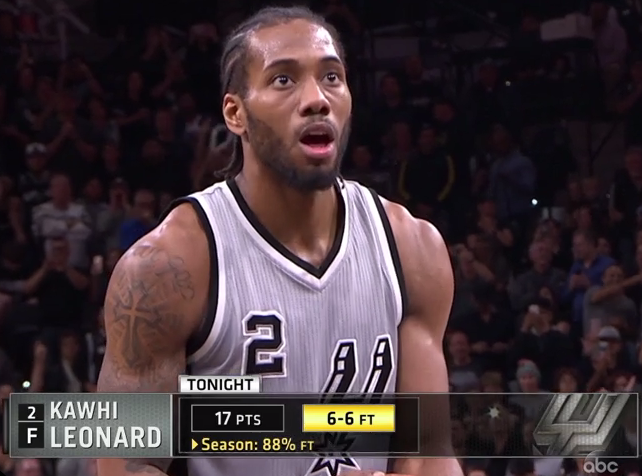 WE JUST HAD A HUGE WIN AGAINST MAYBE THE BEST REGULAR SEASON TEAM IN NBA HISTORY AND WE SENT A CLEAR MESSAGE THAT WE’RE HERE TOO- IN YOUR FACES, LOSERS!

That was a really fun game – despite the low score, it never really felt like that game ever dragged.  Playoff atmosphere, the crowd was great – players came ready to play.

As for if we learned anything about a Spurs Warriors potential playoff matchup? I think the only thing that was a real takeaway was the fact that this matchup is closer to today’s result than it is the Warriors 30 point blowout of them on January 25th.  Despite the Spurs spirited effort – the Warriors missed plenty of open shots that could’ve changed this game early, and I think the Spurs present legitimate matchup issues to the Warriors as well.  If the Basketball Buddha loves us, we have these two teams match up in the Western Conference Finals as a de facto Championship series.

Power Rankings for the Week: